Studio Krokodil is a professional music studio located in Pancevo. The studio is owned by brothers Stevanovic, known as Ljubicice. As part of the studio, publishing house Krokodil exists in cooperation with the publishing house Kontra. 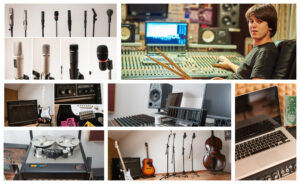 Ljubicice are an electric blues duo from Pancevo. Authors and producers, Petar and Vuk Stevanovic, for almost a decade represent the inevitable part of the regional alternative scene.

In close partnership with a dozen top professional musicians, all over Europe, they perform a variety of concert experiments, from electro-stage spectacles to warm acoustic performances.

The scenic debut of their music won the first prize in the competition of bands Tvoj Zvuk, and the following year they were announced as the most promising young band by Popboks magazine. Since then, they have released three albums, two EPs and four singles, with numerous collaborations with music artists around the world, and performed at almost all major festivals in the region.

In every new project, with a lot of effort, they build a remarkable combination of modern and retro sound. They include stylish bits and guitars from the sixties, with a rich musical language that most often speak about everyday topics and love in particular. The elements of the new wave, blues and Tintinnabula are also part of their electronic expressions.